Yup, that topic. Young children and the Mass.

Little did I know seven years ago, before our first was born, what an expert I’d become on the topic.

At first, it seemed so easy to go to Mass with a child. We’d go to Mass, infant Clare would nurse or sleep, and maybe need a diaper change. We had it down! Then she got mobile. From ages one to three, the only somewhat effective solution we could find was keeping her restrained in a stroller at the end of a pew. But that didn’t really help her to learn about Mass, and certainly not to love the sacraments or God. It was just survival.

And we had our second child, Dominic, when she was two and a half! I could just see it – a future parade of strollers restraining our children so we could make it through Mass. Something had to change. The strollers had to stop blocking the aisles.

We KNEW our kids had a baptismal right (if not a responsibility until the age of reason) to be at Mass.

We KNEW that we wanted our kids to love and understand the Mass and to love Jesus. Not just be quiet and zone out during Mass.

We KNEW that our kids were still getting something out of Mass, even if it was just grace from being in the presence of our Lord. And we needed to go to Mass.

We KNEW that we were “those people.” And all of it needed to change.

Over time, we learned and started implementing a few basic strategies. Note – none of them are for at Mass; what happens before Mass is 90% of the battle. At Mass we allow minimal child accessories like a quiet fidget toy and/or Mass book and we just focus on Mass. After Mass, good behavior is rewarded with a doughnut and we try to talk about how Mass applies to our lives, not critique what we didn’t like about Mass, but how we are refreshed, charged, and how the readings and homily struck us. Most positive engagement and good behavior at Mass comes from what we do BEFORE Mass.

Hopefully, these strategies can help you too!

This last one is where God turned our lives upside down. Preparing for the content of Mass – specifically, the readings for the Mass. We knew we were supposed to read the readings and prepare prayerfully for Mass. But did that happen when we were childless, let alone now that there were little distraction machines in the picture?

We found if we did a craft or activity based on the readings, interest and understanding skyrocketed and consequently, engagement and behavior at Mass improved. I later found out that 90% of learning for kids under age 7 is kinetic – so duh, this works. But it was REALLY rare we actually found the time to come up with a craft (aka, search the internet), get the supplies, and then actually do the craft with our kids!

So God planted the seed of an idea. If we needed help with this, other families probably did too.

At the time, I was a full-time Discovery network pseudo-educational reality TV producer.

So naturally, it meant we needed to develop a webisode craft show like Crafty Carol, but for a craft for every Mass!

Oh…and wouldn’t it be great if we did all the craft prep so families could just watch a webisode, get their kids inspired, and then pull out a box and have everything ready to go for the craft? Oh yeah, like a subscription box service, like all the awesome but secular craft and kids boxes out there right now?

So there I was with a 4-year-old, 2-year-old, and did I mention very pregnant with a third child and working full-time on a reality TV show?

But God pushes us. One weekend I brought home my gear from set and we cleaned up a corner of our messy playroom to shoot a promo video. It wasn’t easy. I would have loved to quit right then and there. But there was that little voice – you know the one. So we shot the video.

The next week I lined up interns from the local Christian film school (my alma mater) to help us film and edit a pilot Lent series. Baby boy Joseph was born on Christmas day.

While we were in the hospital and recovering at home, the grandparents, aunts and uncles, and my husband and Clare finished painting and prepping our playroom to the be the set for Catholic Crafts with Clare.

We filmed the first episode when Joseph was 3 weeks old, strapped to my chest or in a baby bouncer the whole time.

Fast-forward a few months and we were sending out 100 boxes to bloggers and reviewers. Friends were over until past midnight helping us pack, since we had to do it when the kids were in bed or they’d want to play with all the craft supplies.

Now here we are – over two years later. Clare, that little girl once strapped in a stroller, is now awesome at Mass at 6-years-old. Not only does she “stay quiet” she is ENGAGED. She asks questions. She recognizes the Bible readings. Homilies are still mostly over her head, but because we’ve always prepared for Mass with a craft themed and discussion themed to the readings, she still gets the point.

She knows more about the Bible than many adults I know. She is hungry for her First Communion! She talks to kids and adults about the love of Jesus! She’s a SIX-YEAR-OLD EVANGELIST! Yes, I’m proud (even though there are definitely days she drives me up the wall). And yes, she thinks she knows how to direct TV now.

Dominic, at 4, loves doing the crafts at home and learning about the Bible and God. He’s generally quiet during Mass, while not as outwardly engaged as Clare is. But he still is picking up on things and will lock on to key lines from his favorite homilies.

Joseph, now 2, is still definitely a toddler. But he’s actually in the worship space at Mass about 80-90% of the time (screaming/crying/etc… gets a trip to be HELD restrained in the commons – he quickly realizes that it’s better to sit comfortably on a lap in the pew and play with daddy’s name tag). Some Masses he even makes it all through without any trips to the commons! And his little eyes show us he is paying attention, and we know he’s getting something out of it, even if his communication isn’t there yet to tell us what. And  his second birthday patch bay present is his favorite toy.

And “The Mass Box”? We now have 300+ kids who participate all around the world and are growing every month, getting our boxes of supplies and watching the show and PREPARING FOR MASS. Whenever I’m ready to pull my hair out from all the logistics, we get an e-mail or a message about a child who had a breakthrough in their relationship with God triggered by The Mass Box.

We have an AMAZING team of parents of young kids and young adults who work with us to make it all happen.

Eggleston Services, a local organization that helps those with mental disabilities to have meaningful fulfilling employment, do our craft packing.

We’ve just expanded to our own weekly Sunday/Holy Day magazines, with the readings, craft directions, discussion questions, activities, hand-painted activity sheets, and coloring sheets. We also now include a DVD of SuperBook, an awesome Bible animated half-hour show we discovered that really helps kids dive into the Bible! We work directly with some of the project managers at the show to pick episodes that tie in to the month’s readings.

We’d love to have you join us on the Mass Box adventure, to see if it would also be a help to your family!

As a thank you for trying it out, we’ve got a coupon code for this blog – CATHLINK15 for 15% off sitewide. We’ve got a lot of options since we’ve found Catholic families come in all shapes and sizes! You can check them all out at www.themassbox.com. 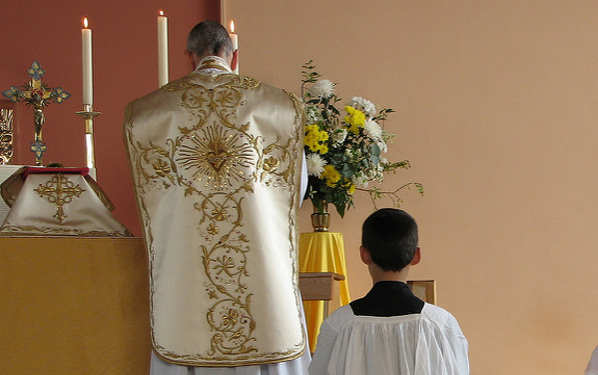 Last week, Cardinal Robert Sarah who is the Prefect of the Congregation for Divine Worship (the person in the Vatican… 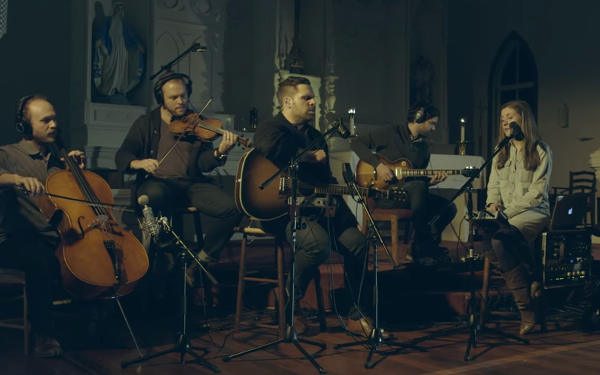 Everyone can name a Christmas carol or two, but what about Easter songs? Can you sing any that aren’t cute… 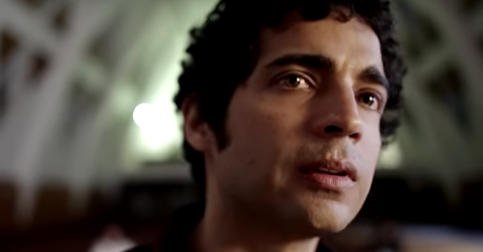 When we go through moments of pain and difficulty, it is easy to blame God or feel abandoned by Him,…

Hallow Is The New Catholic App Helping Us Pray More!

“Every time Christmas comes around, I love to look at representations of the child Jesus. Statues and pictures which show… 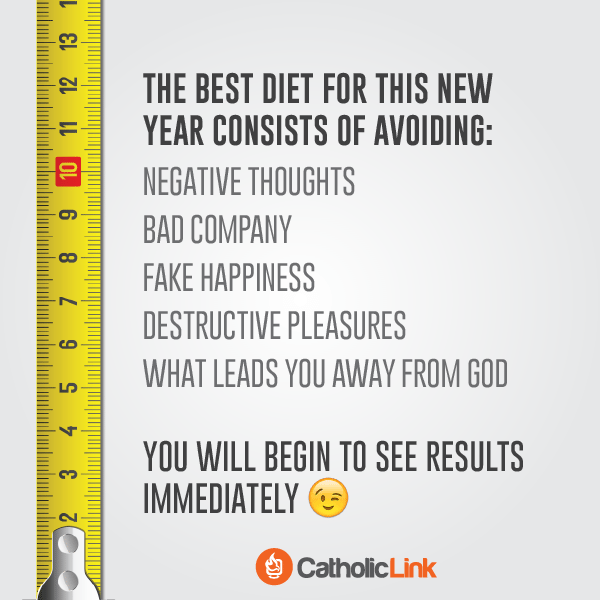 The Best Spiritual Diet For The New Year 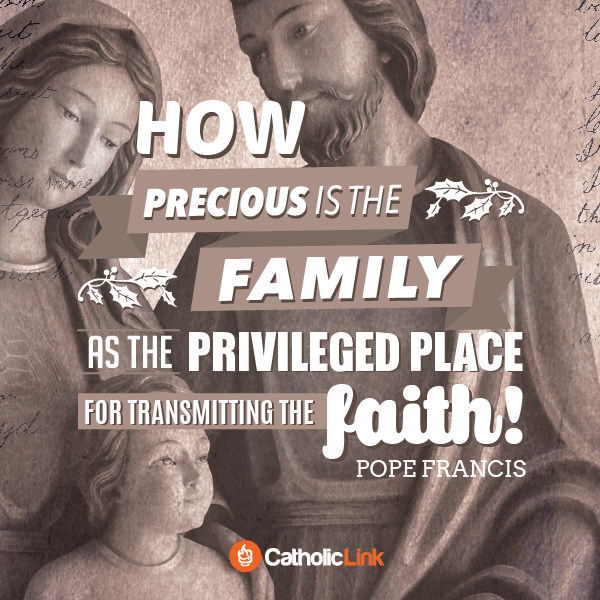 How Precious Is The Family | Pope Francis Quote 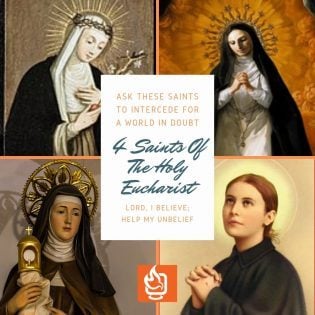 During Mass “Are you not lifted up to heaven?”

When you see the Lord immolated and lying upon the altar, and the priest bent over that sacrifice praying, and…

Are we ready to receive Him? Before the birth of Jesus, his parents asked for a simple dwelling place, but…

Vouchsafe that I may praise thee, O sacred Virgin; give me strength against thine enemies, and against the enemy of…