Catholic Bible Study On The Gospel of John 8:1-11

Jesus went to the Mount of Olives. But early in the morning he arrived again in the temple area,  and all the people started coming to him, and he sat down and taught them. Then the scribes and the Pharisees brought a woman who had been caught in adultery and made her stand in the middle.

They said to him, “Teacher, this woman was caught in the very act of committing adultery. Now in the law, Moses commanded us to stone such women. So what do you say?” They said this to test him, so that they could have some charge to bring against him.

Jesus bent down and began to write on the ground with his finger. But when they continued asking him, he straightened up and said to them, “Let the one among you who is without sin be the first to throw a stone at her.” Again he bent down and wrote on the ground. And in response, they went away one by one, beginning with the elders. So he was left alone with the woman before him. Then Jesus straightened up and said to her, “Woman, where are they? Has no one condemned you?”

She replied, “No one, sir.” Then Jesus said, “Neither do I condemn you. Go, and from now on and sin no more.”

Reflection on Adultery: We’re all guilty.

Life is like a constant game of mirrors: we project our frustrations onto others, we condemn them for things we don’t dare see in ourselves, yet we care for others when they display our most fragile features.

Other people constantly show us a reflection of ourselves and reveal parts of us that we would be unable to see otherwise. Sometimes we are surprised, sometimes unbelieving, and sometimes even frustrated. Many of our relationships are the product of this game of mirrors. Jesus also finds himself in the middle of this game and agrees to play along.

The adulteress woman thrown into the center becomes a projection of all the men that surround her. In her they see all of their inability to be faithful to the Law. They project onto her their frustration, their inability to persevere. This woman’s adultery is their own potential adultery, their own inevitable infidelity to God.

They vent upon her the rage they have towards themselves upon seeing that they too are unfaithful observers of the Word. They find themselves continually surprised in their adultery by God. In this woman, we see the reflections of Israel, the adulteress wife, an unfaithful people. This was the accusation that resounded in the words of the Prophets that were proclaimed to them every Saturday in the synagogues.

We are all adulterers, unfaithful to ourselves, our vocations, unfaithful to life, traitors to our most dear relationships. We strive constantly to find new lovers to deceive us with their false promises. Only with great difficulty can we stay where life has placed us for we are constantly running away, seduced by our summer loves.

We can’t be sure what Jesus wrote on the ground, but it seems that in those words, written in the sand, the scribes – experts in scripture – could read about themselves, as if Jesus had placed a mirror in front of their eyes. For these experts of the Word, there was no better mirror than words themselves. Jesus is the unexpected. He is the event that we come across, seemingly by accident, that reveals the truth about ourselves, whether we like it or not.

This woman was surprised in adultery, as if she were spied on by people that were waiting for the moment to reveal her sin. We often spy on each other in the same way, waiting for the other person to fail, to fall into sin. But since life is a game of mirrors, another person’s fall my also be our own.

In this game of mirrors, the circumstances are turned on their head: those who accuse suddenly become the accused. We find ourselves in an ambiguous situation in which we don’t know who is being charged. The Scribes and Pharisees seemingly force Jesus into the role of judge, but it is actually he who is being judged by them. The adulterous woman is the reflection of Jesus: he is about to be condemned to death just as she is. Jesus can see his own destiny in the potential destiny of this woman.

Jesus stands and removes himself from the role that others have wanted to put him in. He steps aside, allowing the Scribes and Pharisees to see themselves in the woman’s adultery. In her, every man sees his own sin. In her, every man can see the destiny that he deserves and that which he is delivered from. Those who accused her realize that they have become the accused.

After the Scribes and Pharisees have left, Jesus can take up his role again as the authentic judge of the woman before him. He is the only true judge, he who, being without sin, is the only one that could condemn her. But Jesus stands up for her also: He that stands before her has already risen, he is the one that rises above death, it is he that has erased our sentence by defeating death.

Once again, this woman is a reflection of each of us. In her freedom we see ourselves freed. In her we can see our own astonishment: we were adulterers and yet we have not been stoned. This woman does not deserve forgiveness and neither do we. And yet God has given it to us. We are left in wonder with this woman of the Gospel.

– At this point in your life, who or what are the mirrors that you see yourself reflected in?

– What role do you often play in the trials of life: that of judge, victim or prosecutor? 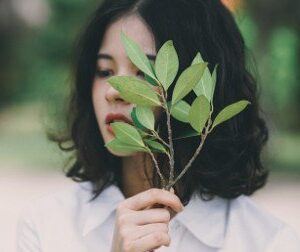 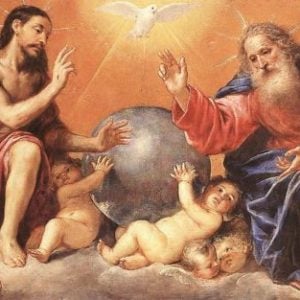 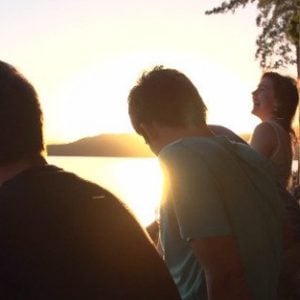