We were somewhat taken aback by some of the negative responses garnered by some recent posts on same-sex issues.  Specifically, that so many of our readers could not fathom how Pope Francis could be against same sex so-called “marriage”, or adoption by same-sex couples; this took us by surprise. Although, given that many websites seem to reduce Pope Francis’ opinion on the issue to the phrase “Who am I to judge?”, perhaps it is not so surprising.

It seems that for many, the image of our merciful, accepting and all-welcoming Holy Father can in no way be reconciled with such “conservative,” “right-wing,” and/or “intolerant” views that disagree with same-sex “marriage” and adoption. Perhaps with time, some might come to discover that the Holy Father’s views on the unique & unchangeable essence of marriage  and the family are actually inspired by the same font of Truth & Love that nourish the Pope’s other qualities like his mercy, his openness, his charity (the very personality traits which have so endeared the masses to His Holiness). Perhaps one day, some might discover that those who profess the “traditional definition” of marriage, those who like Pope Francis say, ” are indeed the very same people who can say in sincerity, “Who am I to judge?”.

In order to shed some light on our Holy Father’s views, we wanted to point you to the source. The following are extracts (**the titles are mine, the rest are direct quotes) from On Heaven and Earth: Pope Francis on Faith, Family, and the Church in the Twenty-First Century

. Originally published in Argentina in 2010, the text brings together a series of conversations between then Cardinal Bergoglio and Rabbi Abraham Skork, as they talk about various theological and worldly issues (including God, fundamentalism, atheism, abortion, homosexuality, euthanasia, same-sex marriage, and globalization). From these personal and accessible talks comes a first-hand view into the mind and heart of the man who is now our Holy Father, Pope Francis.

These points certainly do not exhaust all that Cardinal Bergoglio/ Pope Francis thinks on the issue, but I think that they can offer very helpful insights. For some more recent comments of Pope Francis on the issue, you may wish to look here or check out a few quotes at the end of this post.

1. Religion in the Public Square.

“Religion has a right to give an opinion as long as it is in service to the people. If someone asks my advice , I have the right to give it to them. The religious minister, at times, draws attention to certain points of private or public life because he is the parishioners’ guide. However, he does not have the right to force anything on anyone’s private life . If God, in creation, ran the risk of making us free, who am I to get involved? We condemn spiritual harassment that takes place when a minister imposes directives, conduct, and demands in such a way that it takes away the freedom of the other person. God left the freedom to sin in our hands. One hasto speak very clearly about values, limits, commandments, but spiritual and pastoral harassment is not allowed.”

“Anthropologic Regresion, a weakening of the institution that is thousands of years old and that was forged according to nature and anthropology. Fifty years ago, concubinage, or co-habitation, was not very socially common like it is now . It was even a clearly derogatory word . Later, the whole thing changed. Today, living together before getting married, even though it is not right from a religious point of view, does not have the same negative connotation in society that it had fifty years ago. It is a sociological fact that co-habitation certainly does not have the fullness, or the greatness of marriage, which has thousands of yearsof value that deserves to be defended. It is because of this that we warn about its possible devaluation and, before modifying the law, one must reflect a lot about all that it will put in play.”

“For us it is also important what you just said, the basis of natural law that appears in the Bible that talks of the union of man and woman. There was always gay. The island of Lesbos was known that homosexual women living there. But it never happened in history that sought to give them the same status as marriage. He is tolerated or not tolerated him, he admired or not admired, but it is never equated. We know that in these times of change of times growing phenomenon of homosexuality. But this time it is the first time the legal problem of assimilating marriage arises, what I consider a negative value and an anthropological reversal. I say this because it transcends the religious question is anthropological. If there is a union of private type, there is a third party nor affected society. Now if given the marital status and are eligible for adoption, might have affected children. Everyone needs a male and a female parent mother who help to shape their identity.”

I insist that our opinion about the marriage between two people of the same sex is not based on religion, but rather on anthropology. “When the head of the Government of the City of Buenos Aires, Mauricio Macri, did not appeal the judge’s opinion right away authorizing a [same-sex] wedding, I felt that I had something to say, to inform; I saw myself with an obligation to state my opinion. It was the first time in eighteen years as bishop that I criticized a government official. If you analyze the two declarations that I formulated, at no time did I speak about homosexuals nor did I make any derogatory reference toward them. In the first declaration I said that the judge’s opinion was worrisome because it indicated a certain indifference toward the law, since a justice cannot alter the Civil Code in the first place, and she was altering it. At the same, I was alerting people to the fact that the head of the government , responsible for protecting the law, was prohibiting the appeal of this judgment. Macri told me that these were his convictions; I respected him for that, but the head of the Government does not have to transfer his personal convictions to law. In no moment did I speak disrespectfully about homosexuals, but, yes I did intervene and point out a legal issue.”

5. Better a same-sex couple than an orphanage or an institution?

“It is often argued that a child would be better cared for by a same– sex couple rather than in an orphanage or an institution. Those two situations are not optimal. The problem is that the State does not do what it has to do. Just look at the cases of children who are in certain institutions, where the last thing that happens is recovery. There must be an NGO, churches, or other types of organizations that can take care of them. They should streamline the procedure of adoption, which are never-ending, so that these children can have a home. One failure of the State does not justify another failure of the State. The underlying issue must be addressed. More than a marriage law so that people of the same sex can adopt, we have to improve the adoption laws, which are excessively bureaucratic and, in their current implementation, encourage corruption.“

6. Discovering the “other” is a huge challenge.

Source: Chapter 16: “On Same Sex-Marriage” in On Heaven and Earth: Pope Francis on Faith, Family, and the Church in the Twenty-First Century

For some more recent material from Pope Francis, I would suggest consulting his address to the participants of an International Colloquium focused on the complementarity between man and woman. For more information on his discourse, you may also want to consult this CNA news article. Here are a few quotes (the numbering is my own):

1. “To reflect upon complementarity is but to ponder the dynamic harmonies which lie at the heart of all Creation. This is a key word: harmony. The Creator made every complementarity, so that the Holy Spirit, the Author of harmony, could create this harmony.”

2. “The family is the foundation of co-existence and a guarantee against social fragmentation. Children have a right to grow up in a family with a father and a mother capable of creating a suitable environment for the child’s growth and emotional development. This is why, in the Apostolic Exhortation Evangelii Gaudium, I stressed the “indispensable” contribution of marriage to society, a contribution which “transcends the feelings and momentary needs of the couple” (n. 66).”

Say This, Not That: Catholic Conversations With LGBTQ Persons 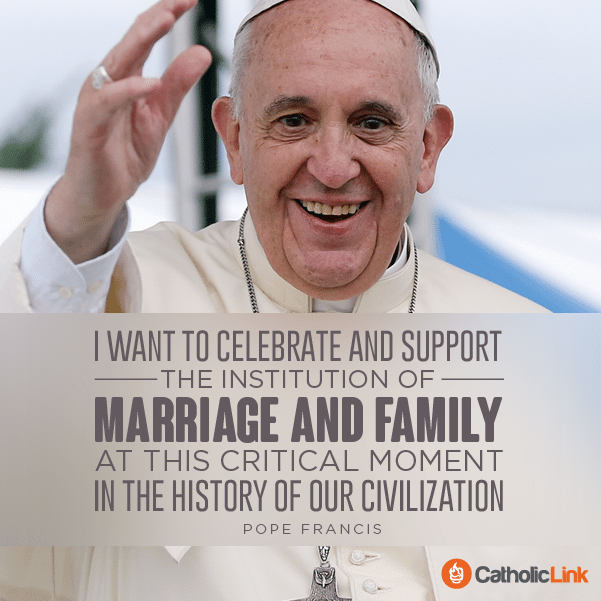