Five Feminine Virtues I Learned From The Joyful Mysteries | Part 3: The Nativity

Relations between the sexes: Have they ever been worse?

It’s enough to tempt one to despair.

Thankfully, the Church is a bulwark of sanity in every human realm, not least of all in matters of sex and sexuality, on the deepest, primordial realities of Male and Female.

Those of us who see the chaos and are troubled by it need not wallow in helplessness, much as we might be pained by the current landscape, or even wounded by it in our own lives and relationships. But what can we do?

My answer is this 5-part series… the fruit of personal meditation, reading, and prayer. It is not an authoritative or comprehensive exposition, nor is it a theological treatment of the virtues as the Church names and categorizes them. Rather, it’s meant to start an informal conversation among friends – among sisters.

Part 1: The Annunciation corresponds to Receptivity

Part 2: The Visitation corresponds to Solicitude and Hospitality

Part 3: The Nativity corresponds to Maternity and Vulnerability

Part 5: The Finding of the Child Jesus in the Temple

I present these entries not so much in the hope of teaching anyone anything, but more so of sharing for the sake of encouragement and healing. To that end, I also invite you – as you read this series, comment on it and share it – to pray with me for a restoration of the masculine and feminine virtues in society, starting with ourselves.

As so many saints urge us to pray the Rosary daily, I believe it can play a key role in this restoration – which by nature will not be explosive and instantaneous, but rather gradual, gentle and one person at a time.  Not only does the Rosary tether us to our Mother and draw us closer to her Son, but it has almost infinite depths and truths to reveal to us about ourselves.

The Rosary is rich with lessons of healing, purpose and identity for all of humanity. It offers gifts and graces for all who pray it – and I daresay particular and unique graces for every individual. But in its invocation of and connection to Our Lady, the perfection of femininity, this powerful devotion offers certain gifts to women in a special way.

The Nativity corresponds to Maternity and Vulnerability 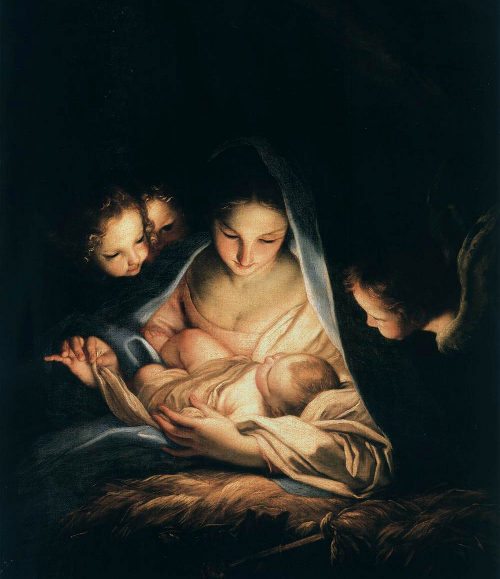 Receptivity (as at the Annunciation) again appears here – as in many ways it seems to encapsulate of all the lesser feminine virtues; in this case, in the reception of new life into the world, into her arms and care. Hospitality appears (again, as at the Visitation) in the form of her readiness to receive the shepherds and the Wise Men.

They have some mysterious role to play in Salvation too, having traveled for a glimpse of this miraculous arrival of the Messiah. Mary makes this possible, always gently drawing others in to marvel at the glory of Christ.

The birth of Jesus, and Mary’s role here tells the obvious truth about women’s biological maternity, but also of spiritual motherhood: the virtuous and natural impulse of women to “adopt” others: children, grown-ups, loved ones, friends and even strangers whom they pray for, care and worry about, tend to, and so forth. Women are naturally caretakers.

When we stunt this impulse, when we replace it with more manly pack-like, warrior-like activities (versus particular, one-on-one, intimate ones), or when we turn the gaze inward upon ourselves, we deprive not only the other whom we would care for, but also ourselves – short-circuiting something vital.

Another virtue that speaks to me in the Nativity proposes a gentle alternative to contemporary norms – that of Mary’s feminine vulnerability.

Hear me out on this one. She is very pregnant. The Holy Family are traveling for the census and there is no room for them at the inn. She is not the negotiator here. She can purchase nothing, negotiate nothing… she is entirely in the hands of Joseph, and so she must submit to his leadership and to God’s providence in ultimately finding shelter in the cave.

All she can do is her job, which is to bear the Christ Child. Peace directs her, even amidst the uncertainties. She has allowed Joseph to fulfill his role in protecting and providing for her.

Sometimes we have to conquer ourselves and allow God to reshape us (especially where we’ve been malformed or wounded) in order to create space for men to be their best selves. Is it a shock to us that the heroic male stereotypes persist in Marvel comics and Lord of the Rings movies… maybe in our own unarticulated imaginations too?

But if the woman refuses protection, resists manly solicitude and strength, where will the man direct his own loftiest efforts? Do they simply go unrealized? Does he never get the chance to do the hard, self-giving thing? The thing that he was made for? The thing that makes us love him most, and vice versa?

Things Mary did NOT do at the Nativity:

1. Hold a baby shower or reveal party; set up a maternity registry.

2. Demand the impossible of Joseph, or blame him unreasonably, under the trying circumstances of their census travel and no room at the inn.

3. Declare independence from Joseph to figure out a better setting for herself.

4. Refuse the visits and gifts of the shepherds and the wise men, denying them the chance to pay tribute to the Infant King.

5. Say anything at all, at this point (according to the scriptures). Would there have been much conversation between Mary and Joseph? Between the Holy Family and these unknown first visitors? Certainly not idle chatter. How could it have been anything but reverently silent, listening to the coos of the Newborn King? What does one say in the face of such Mystery?

Instead she mothered, she received, she accepted help and protection, and she pondered in her heart, as she did through almost all of her hidden life, making room for others, an outward expression of the space she made interiorly for God in her Immaculate Heart.

Let us, as women, ponder Our Blessed Mother’s miraculous, beautiful and truly mysterious role in the Nativity this Advent and Christmas season, asking her to be our guide in prayer and in cooperation with God, becoming more and more the women He created us to be.

*Elsewhere at Catholic-Link, we have addressed Men and Masculinity, and there’s so much room to examine, discuss, and work towards healing on both sides… let’s keep talking!

**I will not typically use the word “gender” in this series, because I reject the way the term is now commonly but erroneously used, i.e. as a “mental construct.”  Gender is for grammar in most non-English languages, but Male and Female, He created them (Genesis 5:2). 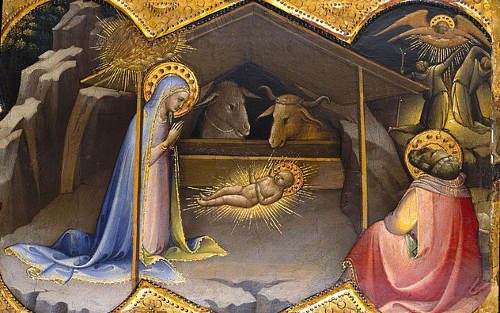 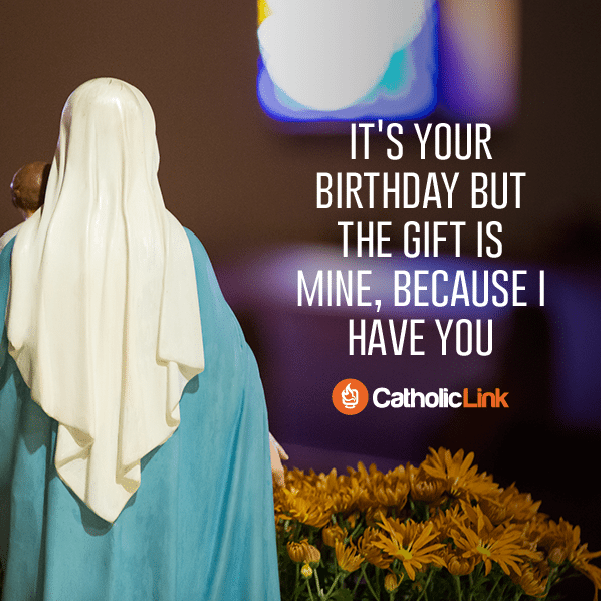 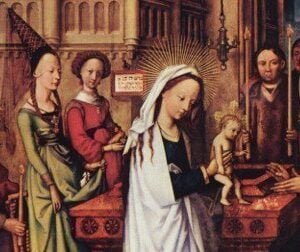 Five Feminine Virtues I Learned From the Joyful Mysteries 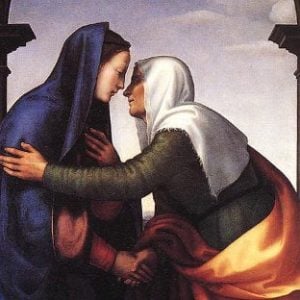 Five Feminine Virtues I Learned From The Joyful Mysteries Of The Rosary: The Visitation 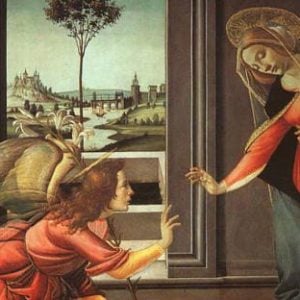 5 Feminine Virtues I Learned From Mary In The Joyful Mysteries Of The Rosary (Part 1: The Annunciation) 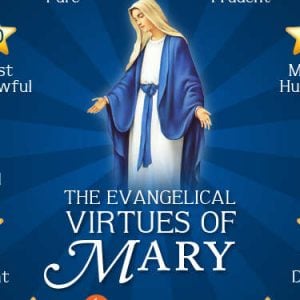 If You Desire to Grow in Holiness, Strive for These 10 Evangelical Virtues of Mary 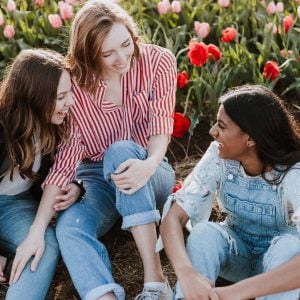 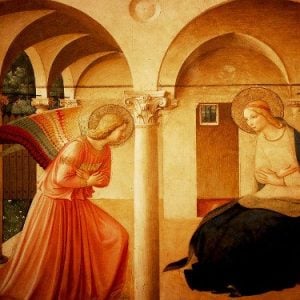 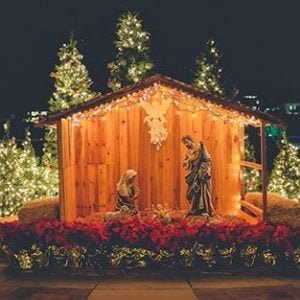